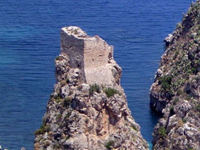 Of Scopello: "done tower to rise on the back of an eminent rock-cliff, that longly sticks out in sea, near the called point the Fungia in the gulf of Castell'a sea. In the site note where today she places the ancient city of so said Cetaria it bloomed you from the "piscaggione de'tonni" (period of fishing of the tunas) that "ivi facevasi" (they did him), what then meeting place in the hamlet was granted from Fred emperor to the Monastic Church of the Martorana in Palermo. The city of the Mountain in Trapani had subsequently the dominion of called hamlet, and then ours "Collegiate" of S. Pietro of Building, and then with the destroyed time made him.