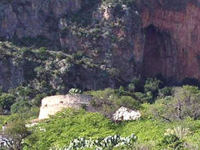 Of the Guzzo: "tower with great cave a great deal that soprasta in the cove dictates the Guzzo, S. Giuliano) of so that she has the name, (coastal of the City of the Mountain of S. Giuliano).
In this tower keep herself a staircase of 60 degrees of rope that was worth to save the torrieris and the people on the occasion of invasion of pirates..." (this is the tower that the Camilliani saw "incomplete" during his inspection of the coasts of Sicily, he was built from such Ottavio Gioacchino "to adapt you a tonnara that today he is skipped)...”